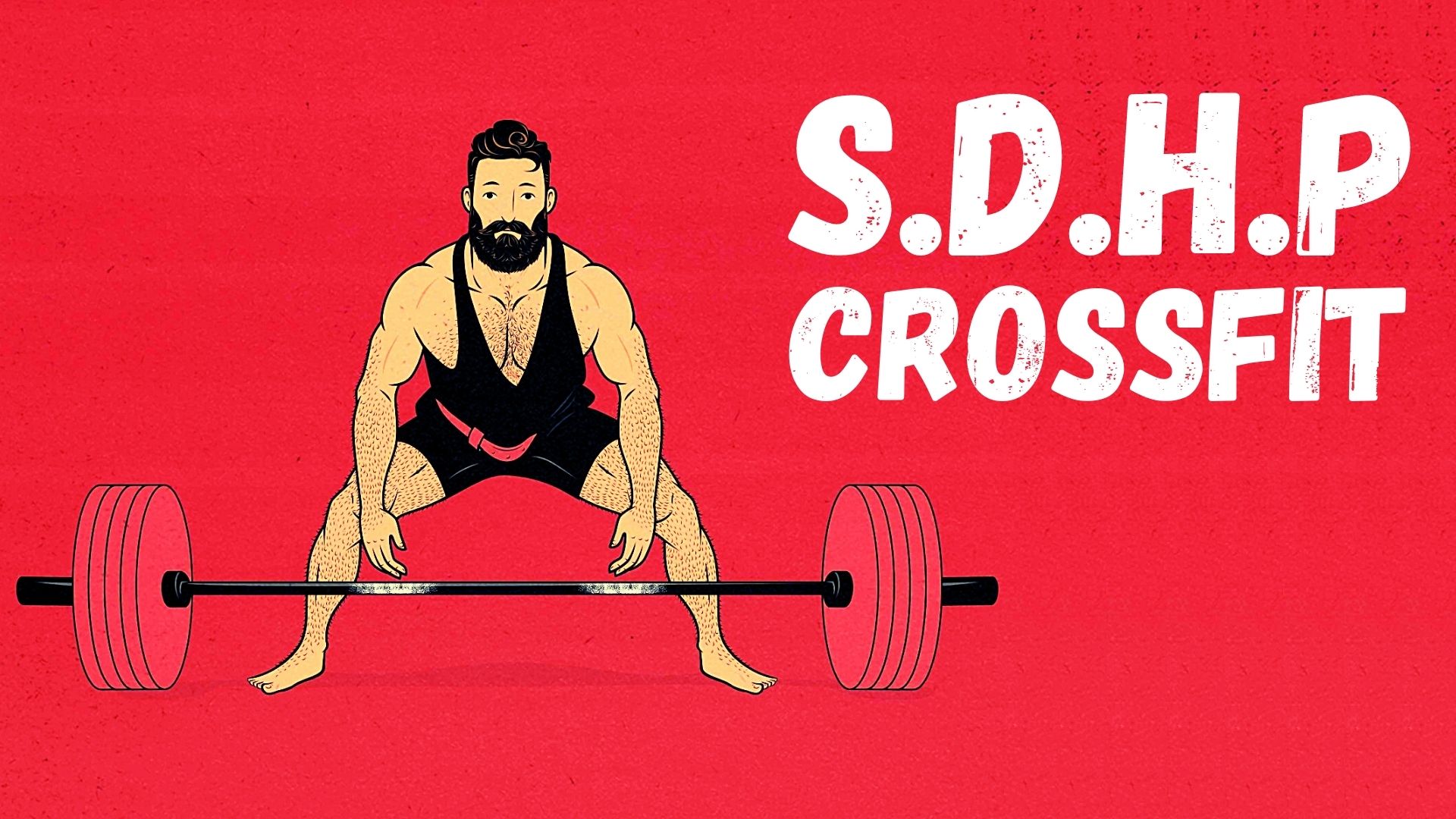 With these eight sumo deadlift high pull routines, you can develop unstoppable pulling strength in no time.

You will learn how to increase power by effectively doing sumo deadlift high pull workouts.

During this exercise, the barbell develops a significant amount of momentum, making it much easier to lift.

Understanding how to transfer power from the hips and legs through the upper body and into the lifted object is critical to mastering the sumo deadlift high pull technique.

Using the sumo deadlift high pull as a conditioning exercise has various advantages over other exercises because of its ability to engage all main muscle groups, its broad range of motion, and its ability to be done quickly.

What Is The Sumo Deadlift High Pull, And How Does It Work?

The high pull starts with a regular deadlift performed in a wide stance (sumo deadlift), but the athlete must move the weight (usually a bar or kettlebell) from the shin to the chin while keeping their elbows up.

Sumo deadlifts are performed while standing with the barbell at mid-to-upper thigh height and employing a sumo deadlift stance and grip.

Make a strong effort to extend your knees and hips when the bar rises.

As you finish the activity, bend your elbows and bring the barbell up to your neck to complete the movement.

The elbows should be elevated over the bar after each movement.

For the arms to be able to bend, the knees and hips must be completely stretched.

The Sumo Deadlift High Pull is a fantastic complement to the ‘Thruster’ in terms of the range of motion, line of movement, duration of action, and speed of action, among other characteristics.

According to the Journal Moves Guide published by CrossFit, they like this as an alternative to Concept II Rowing when the weights are not too heavy.

When doing sumo deadlift high pull, the hips and shoulders should both rise at the same time.

It would be best if you used your hands to “muscle” it to raise the bar.

This implies that your timing is improper.

The hip extension exercise is the most crucial aspect of this workout, so pay attention.

Using your heels and hips to force into the floor and rupture your hips, you must transfer the bar from the knee to the chest position.

Unless you have a good hip drive, lifting even the smallest of weights to the top of the exercise will be difficult.

A whole exercise cycle is finished when the bar reaches below your chin.

The sumo deadlift high pull has four (4) distinct benefits, which will be explained in further detail in the next section.

Remember that this exercise may be completed with various equipment (barbells, dumbbells, kettlebells).

#1 Lateral Chains Are Being Developed

Anatomically, the term “posterior chain” refers to the back muscles responsible for the most human locomotive and forceful movements, such as hip extension, among other things.

The hamstrings, gluteals, and back are targeted by the sumo deadlift high pull, all of which may enhance muscle hypertrophy and strength, which are necessary for more explosive and strength-oriented movements in sports, training, and daily life in general.

However, while the sumo deadlift high pull may not have the same power output as snatches, cleans, jerks, and push presses, it can be a useful tool in the development of power output capacities in beginners or those who are unable to perform more complex posterior chain power movements such as snatch and clean.

#3 Movement Of The Whole Body As A Compound

The sumo deadlift high pull is a total body complex workout that incorporates exercises such as the squat, thruster, snatch, clean, and push press (to name a few).

Exercises that involve a large amount of muscle mass are often the focus of training programs and routines that aim to improve athleticism, functional strength, and caloric expenditure.

#4 Conditioning Of The Metabolic Fitness

The ability to maintain metabolic fitness is vital in sports that need a mix of cardiovascular endurance, anaerobic power, and muscular strength to be successful.

During training sessions, high-rep exercises like the sumo deadlift high pull may stress large amounts of muscle tissue, elevating the heart rate and causing both local and systemic muscular weariness.

Increase the intensity of athletes’ training to help them become more capable of dealing with the demands of competitive fitness WODs and the more strenuous daily life activities as they go through their careers (military, fighting, sports, etc.).

What Are The Muscles That The Sumo Deadlift High Pull exercises?

As a total-body exercise, the sumo deadlift high pull strains a diverse range of muscle groups that must function throughout a wide range of joint motions.

Several muscles are used during the sumo deadlift high pull, none of which are utilized in any specific order.

Is It Possible That Sumo Deadlift High Pull Might Be Dangerous?

While it is true that high sumo deadlift pull is “worth it” because of the location of the shoulders at the top of the pull, the hand placement (narrow) and loading may contribute to an increase in shoulder injuries when performing these lifts under high loads, high volume, and exhaustion conditions.

Trainers and athletes should be aware of the inherent hazards of training. They should be prepared to make the required adaptations if these threats are discovered during training (such as individuals with shoulder issues, flair-ups, or discomfort).

When doing high-rep, heavy-load workouts under increasing stress, it is the coach’s and the athlete’s obligation to analyze the possible dangers associated with doing so (because the lower body may move some weight and develop momentum for you in this one).

For efficiency, let us say:

This is a great workout for moving or at home since it requires minimal equipment and can be performed almost anywhere.

Then, after a minute, you switch between five different stations.

Unlike other timers, the timer does not reset or return to zero after each exercise.

There is a one-minute break allowed between each of the five-minute rounds.

Athletes must move to their next station after the “rotation” instruction is delivered to get the highest possible score.

It’s considered to be one of the most difficult WODs in CrossFit.

It was constructed to replicate the five-minute work time followed by a one-minute rest during a mixed martial arts match.

Workout #3 Luck Of The Irish

When doing sumo deadlift high pull training, it is critical to understand how to extend your hips before bending your arms to get the greatest force output from your hip and knee extensors.

There is a 30-minute time limit.

This workout will only need the use of a single kettlebell.

At the end of the workout, you will have completed a total of 165 burpees and 55 repetitions of all other exercises.

Resulting in a total of:

There are a total of six rounds to account for time.

To achieve good technique while doing kettlebell deck squats, the kettlebell must be in touch with the ground behind the head before each rep.

You may make it more manageable by omitting the kettlebell from the deck squat.

A few times, you will do a deck squat in a WOD.

This is a difficult start since you are experiencing a unique sort of squat under WOD conditions.

This exercise is performed with a low number of repetitions and light weights.

Please pay close attention to the kettlebell deck squats since they will likely cause you to go through this short workout sluggishly.

Prepare yourself to go at a reasonable speed.

AMRAP for fifteen minutes (with a partner)

Alternate movements and change them up as required to keep things interesting.

Rest for one minute.

This is an excellent conditioning workout that, even though it is just 15 minutes long, has many exercises.

In 24 minutes, an AMRAP was performed.

AMRAP in less than six minutes:

After that, it’s six minutes of AMRAP.

After that, it’s six minutes of AMRAP:

A total of fifteen pull-ups were performed.

A total of 45 air squats were performed.

The total of the three components is called the “final score.”

In the first and third AMRAPs, assign a single point for each rep completed in each AMRAP.

To allow athletes to touch and go as much as possible, all ten general physical skills were incorporated into the 2:1 work-to-rest ratio.

You won’t be able to raise the same weight when doing an SDHP while using the pull to the chin (at least compared to a deadlift).

If your goal is to increase your overall or one-rep maximum strength, you may want to stick with deadlifts.

If you’re looking to focus on your upper body or enhance your fitness during a metta CrossFit session, the SDHP may be a fantastic choice for you to try.

With deadlifts, you can get more repetitions with greater form and with less weight than you can with bench presses.

Sumo deadlifts are performed while standing with the barbell at mid-to-upper thigh height and employing a sumo deadlift stance and grip.

The sumo deadlift high pull is a total body complex workout that incorporates exercises such as the squat, thruster, snatch, clean, and push press.

This exercise has four distinct benefits, which will be explained in our article.

The sumo deadlift high pull strains a diverse range of muscle groups that must function throughout a wide range of joint motions.

Sumo Deadlift High Pull is one of the most difficult WODs in CrossFit.

This WOD includes a kettlebell deck squat and burpee with a barbell in front of you.

The sumo deadlift high pull, often known as the SDHP, is an extreme version of the traditional deadlift.

In CrossFit’s L-1 certification program and metabolic conditioning exercises, movements like the sumo deadlift high pull, often known as the SDHP, are crucial components of the program.

Including them in your routines may assist you in developing greater muscle mass in your shoulders, legs, and back.

Incorporating them into a “chipper” workout or another regimen may assist you in achieving greater physical fitness.