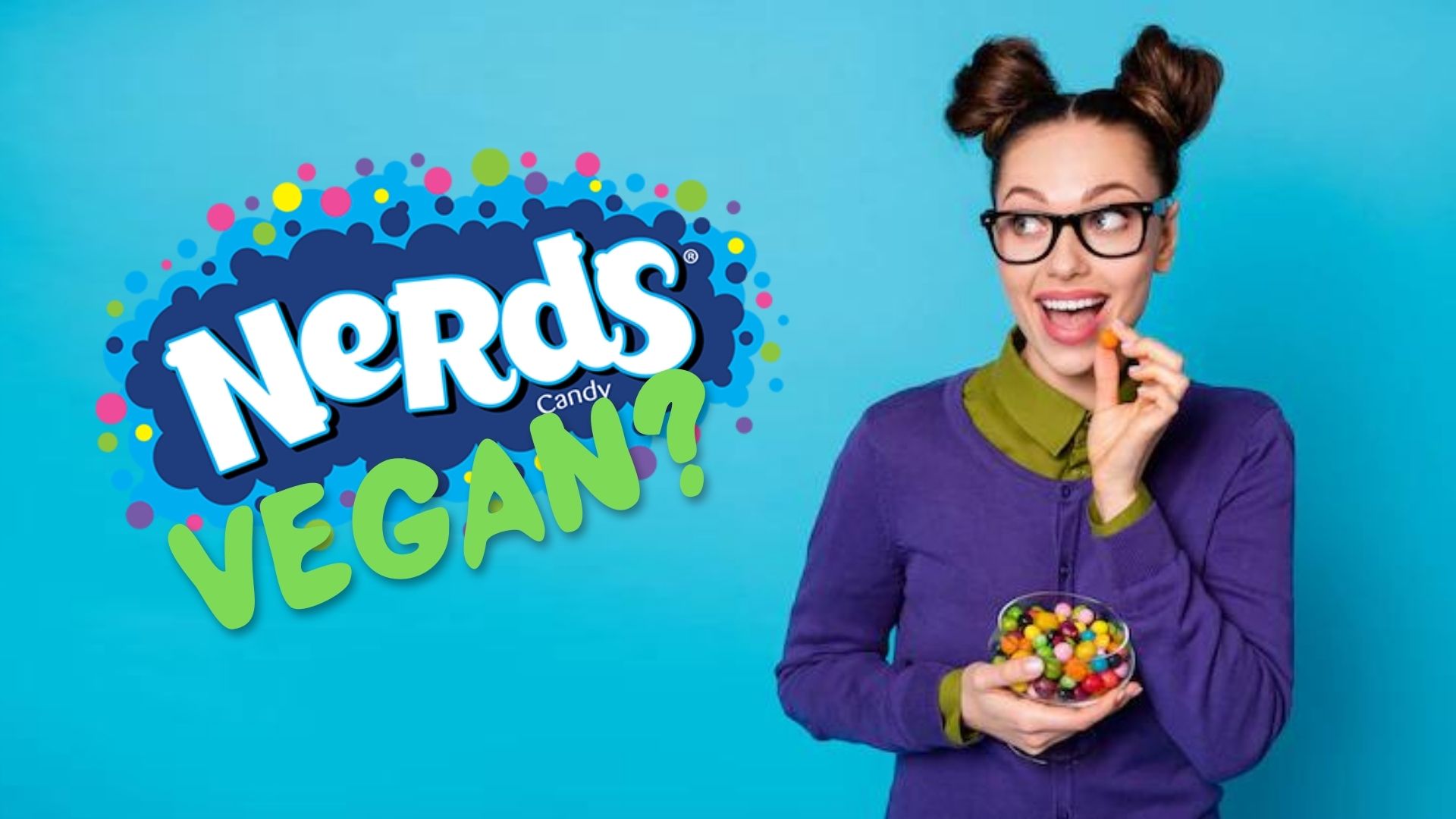 This is not the case for people who spend a lot of time obsessing about one subject or hobby (like me).

This delicious candy brand has been around since the 1980s.

It comes in many varieties, such as Big Chewy Nerds or Nerds Rope.

Some Nerds are vegan.

However, it all depends on what flavor you buy.

Carmine is an ingredient that is made from crushed insects.

This is an ingredient made by boiling animals’ skin, cartilage, and bones.

It is often what the meat industry considers leftovers.

You can live a vegan lifestyle if you make the right choices.

However, it may be challenging to find suitable snacks and sweet treats.

Candy is a favorite of many people.

You will be amazed at how many artificial colors and flavors come from animal products.

This can make it difficult to believe in your favorite snacks.

You might want to look at the ingredient lists for some candy in your cabinets!

Many people love the explosive taste of Nerds from Wonka candy.

Many come in combinations of two flavors and are crunchy, delicious, sweet, candy bursting with flavor.

The Nerds are little rocks and are loved for their tangy, tingly taste.

These sweet treats are so popular that they have become addictive.

Are Nerds vegan, then?

How Are Nerds Produced?

Although there isn’t much information on how Nerds are made or manufactured, there is evidence from Unwrapped, which shows employees making candy with sugar crystals.

The episode featured workers using large barrels to spin sugar crystals and then coating them with layers of sugar to create the Nerds shape we love.

Once the shape has been formed, the Nerds go to different locations to add flavors, preservatives, and other food colorings.

After being flavored, they are put into boxes and packages according to their flavor.

What Are The Ingredients In Nerds’ Food?

The majority of Nerds flavors contain:

These colors may not be suitable for vegans.

These ingredients can be used in a vegan diet for the most part.

Dextrose, for example, is sugar made of corn.

Malic acid, on the other hand, is an artificial preservative.

Corn syrup, however, is a sweetener made with cornstarch.

From an outsider’s point of view, Nerds’ main ingredients are suitable for vegans.

The problem lies in the food colorings and other additives found in certain flavors.

The pink and red flavor options most commonly contain colorings made from carmine.

This food coloring is derived from insects.

Some believe that carmine is a natural product, but the bugs that produce it are not very good.

To make one pound of this ‘natural dye, around 70,000 cochineal insects have to be crushed.

The additive is therefore not suitable for vegetarians as it contains animal ingredients.

This is also true for the Nerds rope, rainbow nerds, and Halloween candy.

Contrary to popular belief, Nerds can be vegan if there isn’t a carmine in them.

Many flavors have a warning label that warns that the candy may contain eggs.

This will also be true for the jelly belly, Jolly Rancher, and jelly beans.

It does not contain carmine.

It does not contain carmine.

No, it contains gelatin.

Why Some Nerds Are Not Vegan

Most Nerds, unfortunately, are not vegan.

Carmine is made from crushed insects.

These insects are commonly referred to by the name cochineal.

They are found in Latin America, where they live on cacti.

Every year, millions of cochineal are raised in Peru to make carmine, a coloring agent.

You’ll find carmine in many foods, such as Nerds.

But you’ll also see it used extensively in cosmetics, especially in red lipsticks.

Gelatin is used to thicken many foods, such as Nerds Rope.

It is made by boiling the skin, tendons, and ligaments of animal carcasses that have been discarded in the meat industry.

The only Vegan Nerds is that appears to be Nerds Watermelon & Cherry.

This will depend on your tolerance for artificial colors and sugar.

By definition, sugar is a plant-based ingredient, but it may not always be vegan.

There are two types of sugar found in most products: beet sugar and cane sugar.

They taste identical and have a similar texture, but their refinement processes are different.

The beet sugar is filtered with a diffuser and mixed with additives to crystallize.

However, cane sugar can sometimes be processed and filtered with bone char.

This is a powder that looks like charcoal made by reusing cattle bones.

The good news is that not all suppliers use bone char.

Some suppliers use plant-based alternatives like activated charcoal and ion exchange resins, which eventually result in the same results.

I have noticed that many companies have a mix of sugar suppliers.

It is difficult to determine if a product is vegan or not, as you don’t know which sugar type is being used.

Artificial colors are a common feature in Nerds.

There is evidence that artificial colors (Red 40) are routinely tested on animals to avoid potential health hazards.

Contrary to what I used to believe, it seems that it is not a one-and-done deal.

These tests are actually performed on 2018 mice.

This could mean that artificial colors may result from animal cruelty, and some people might not want to eat them.

You’ll need to make sure that grape-flavored Nerds are vegan-friendly before you get to enjoy them. Let’s look at their ingredients more closely.

Red 40 is often mistaken for Red 4, although they are pretty distinct.

Red 40 is vegan-friendly, so don’t be alarmed if you see it on candy or other food products.

What About Other Colors Than Red And Pink Nerds? Are They Vegan-Friendly

These colors are not allowed because they often contain carmine in their food colorings.

This is to give them the desired appearance and flavor.

Grape Nerds is the best way to stay vegan if you are looking for a more natural approach to eating.

It is not clear if Nerds have pork gelatin or not.

Some sources state yes, while others state no.

This is yet another reason to avoid Nerds and choose vegan-friendly candy options.

It is possible to eat the purple and Grape flavored Nerds while still following a vegan diet.

Depending on your vegan and personal beliefs, you might also consider trying the Cherry Nerds and Watermelon flavors.

Although this particular flavor contains some laboratory-made colors, some can be tested on insects and bugs.

It all depends on how committed you are to veganism or your moral stance.

Only the Grape flavor of Nerds is vegan.

All other flavors are clearly not suitable for vegan living and should be avoided.