Wondering Is Starburst Vegan? Read This! 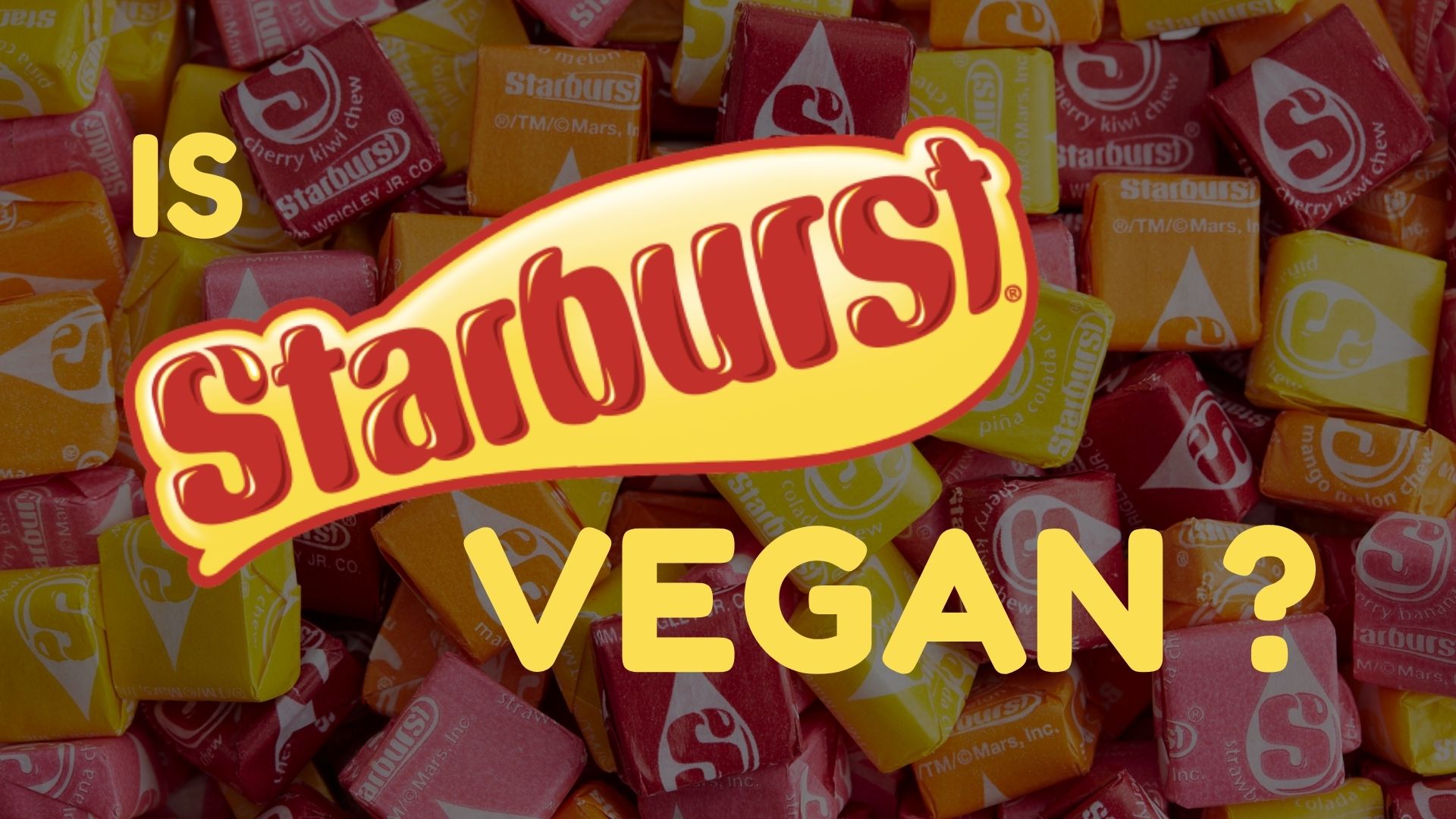 Is Starburst vegan candy that is widely available?

Is there a good explanation for why the solution is so difficult to figure out?

It’s interesting to notice that the components of Starburst change depending on where they were manufactured or distributed.

When it comes to vegan candy, the Starburst Fruit Chew is a question of personal preference.

The starburst product is made in a variety of methods in different countries throughout the world.

Because it contains gelatin, which cannot possibly be vegan, vegan Starburst is not available for purchase in the United States.

However, in the United Kingdom, Starburst is explicitly marked as vegan on both the container and the company’s website.

Opal fruits and original starbursts made their debut in the United Kingdom in 1960, and it was only a few years later that they made their way to the United States, where they became popular.

In one region, they are vegan, while in another, they are not.

What is the best way to be certain?

What is the process through which the starburst comes together?

Don’t forget to ask yourself the essential question: why do different foods taste different in different countries?

As an aside, is there a cause for this, or is it just the fault of the manufacturer?

In this article, we’ll explore the vegan and non-vegan ingredients, the disputed components, and what exactly a starburst candy is.

Read on to find out more.

The Starburst Fruit Chew is made up of wax-wrapped cuboids (rectangular prisms, if you prefer) that measure around 15 mm by 8 mm.

Although strawberry, lemon, orange, and lime were the first four flavors of the sweets, they have been expanded to include apple, blackcurrant, and a mix of the two, in addition to a plethora of other kinds and limited-edition tastes.

Starburst candies and jellybeans, as well as a variety of other starburst delights, are available in the United States.

Both of which are constructed from many of the same constituents.

The majority of Starburst’s products are built on a single set of components.

Generally speaking, the following are the ingredients:

In your starburst, the constituents will vary based on the flavor and the location in which it was created.

A vegan product would be created if the ingredients in Starburst were limited to the components listed above.

Unfortunately, the situation in the United States is not the same as in Europe.

As a result of this, gelatin is employed as a component in their confectionery products.

Jelly beans do not include gelatin, but they do contain a substance known as “confectioners’ glaze,” which helps to preserve them.

Ingredients indicated on the label of the container in the United States include corn syrup, hydrogenated palm kernel oil, and fruit juice concentrate (apple, lemon, strawberry, orange, and cherry).

The presence of gelatin is a major source of worry for vegans since it is made from foods that are not allowed by vegans.

So, Is Starburst Vegan?

Because it does not include any animal ingredients, Starburst candy manufactured in the United States is not vegan.

Starburst candy, which is produced in the United States, contains gelatin, a protein formed from boiling cow and pigskin, tendons, ligaments, and bones.

Gelatin is a protein derived from boiling cow and pigskin, tendons, ligaments, and bones.

The vegan status of Starburst candy created in the United Kingdom is maintained even though it includes gelatin.

It’s important to double-check the ingredients before you buy, since some UK shops may be importing the Starburst product from the United States.

As a consequence, it is important to pay attention to it.

It is important to note that Starburst Jelly Beans do not contain any gelatin at all.

Their lovely exterior is a result of a chemical known as “confectioner’s glaze,” which is used in the production of confections.

The use of shellac, which is a resin produced by the lac bug on trees in the forests of countries such as India and Thailand, is problematic because it is very poisonous.

Make sure to carefully review the ingredient list to be on the safe side.

The drugs I’ve outlined are harmful, even if they are labeled as “vegan” on the label.

Even though some ingredients, such as sugar, palm oil, artificial flavors, and artificial colors, are vegan on the surface, each of these ingredients has a negative side effect.

Vegans with a more rigorous view of life may want to stay away from them.

What would you call candy if it didn’t have such a high percentage of sugar, in your opinion?

Even though sugar is not the healthiest of substances, our bodies need it to function properly.

Sugar is a contentious issue among vegans, who are split on the matter.

Even though sugar is not innately unsuited for vegan diets, some vegans are concerned about the refining process of sugar cane and whether it is safe to eat it.

Cane sugar is refined and processed with the help of bone char.

However, even though it does not contain any true bone char, many vegans are nonetheless concerned about how it is processed.

When it comes to flavorings, there is a heated dispute regarding the use of natural flavorings.

Natural flavorings may be derived from either plant or animal sources, although artificial flavorings are often considered to be less appealing.

At the very least, the components in starbursts are derived from plants.

It is common for flavorings produced by animals to be included on the labels of packaged foods to make vegans and vegetarians aware of the contents.

Food colorings are a contentious matter because, although they are not generated by animals, it is conceivable for these colorings to be tested on animals.

If you’re a vegan, you’ll only wear clothing that hasn’t been tested on animals, whilst others may be a bit more casual about the subject matter.

One example of this kind of testing is the use of animals in the testing of food colorings.

A large number of food coloring companies no longer do animal testing, so this is no longer a source of concern as it was in the past.

We’ve arrived at a topic that’s been a heated topic among vegans, vegetarians, and environmentalists for quite some time.

Palm oil is produced without the use of animal by-products or animal experimentation.

The environmental effect of these items, however, is significant, and many animals suffer as a consequence of their use.

Several initiatives have already been taken to lessen the environmental effects of palm oil production, and a huge number of enterprises have already made the move away from using palm oil in their operations.

Environmentalists and conservationists are also vocal in their opposition to this component; veganism is not the only group that feels this way.

The Starburst brand is comprised of a diverse variety of products, many of which are less well-known than the original Starburst candy bars and confections.

In this part, we’ll take a look at some of the most popular ones to check whether they are vegan-friendly.

These original fruit chews feature many of the same ingredients as these other products, but we’re on the lookout for any errant ingredients, such as shellac or gelatine, that may compromise their vegan certification.

It is also important to note that the above list does not contain all of the many Starburst products that have been introduced throughout the years.

By the usual standards, inspect the labels of any things you are unfamiliar with before using them.

There is a considerable chance that a product branded “non-vegan” may change in the future as a result of changes in the ingredients used (and vice versa).

For starters, you won’t have to deal with the difficulty of unwrapping these new Starburst Fruit Chews mini-candies.

Sweet potato and radish are thrown in for good measure, but the rest of the ingredients are virtually similar to the originals in flavor and appearance. Vegans, on the other hand, are free to eat them as they like.

This sugar-free gum contains a variety of sweeteners, including xylitol, but they are all derived from plants or developed in a laboratory, making it appropriate for vegetarians and vegans.

Carnauba wax is also used as a glazing agent, albeit it must be derived from a certain Brazilian palm to be effective.

As a consequence, vegans don’t have to be concerned about any of the ingredients (any more than those that exist in the original Starburst).

If you’re interested in learning more about other brands of chewing gum, we have a whole section dedicated to them.

Items with starburst designs are not usually readily available in the United Kingdom, although they do come on the market from time to time.

Beeswax seems to be lacking from the version sold in the United Kingdom, which appears to be made from plant-derived carnauba wax.

You should always read the label on any Starburst product before eating it.

Starburst Fruit Chew is made in a variety of methods in different countries throughout the world.

In the United Kingdom, Starburst is explicitly marked as vegan on both the container and the company’s website.

The starburst candy contains gelatin, which cannot possibly be vegan.

Starburst candy, which is produced in the United States, contains gelatin.

Gelatin is a protein derived from boiling cow and pigskin, tendons, ligaments, and bones. Jelly beans do not include gelatin, but they do contain a substance known as “confectioners’ glaze”.

Even though some ingredients are labeled as vegan on the surface, each of these ingredients has a negative side effect.

The drugs I’ve outlined are harmful, even if they’re labeled as “vegan”.

The Starburst brand is comprised of a diverse variety of products, many of which are less well-known than the original Starburst candy bars and confections.

In this part of the series, we’ll take a look at some of the most popular ones to check whether they are vegan-friendly.

This means that vegans don’t have to be concerned about any of the ingredients, which are all derived from plants or developed in a laboratory.

If you are opposed to bone-char sugar and palm oil cultivation, Starburst candy is not for you.

A few additional ingredients in Starbursts may not be acceptable for all vegans because of the presence of gelatin.

Unfortunately, if you are opposed to bone-char sugar, palm oil cultivation, or the collateral damage that happens during the testing of artificial colors, Starburst candy is not for you to consume.