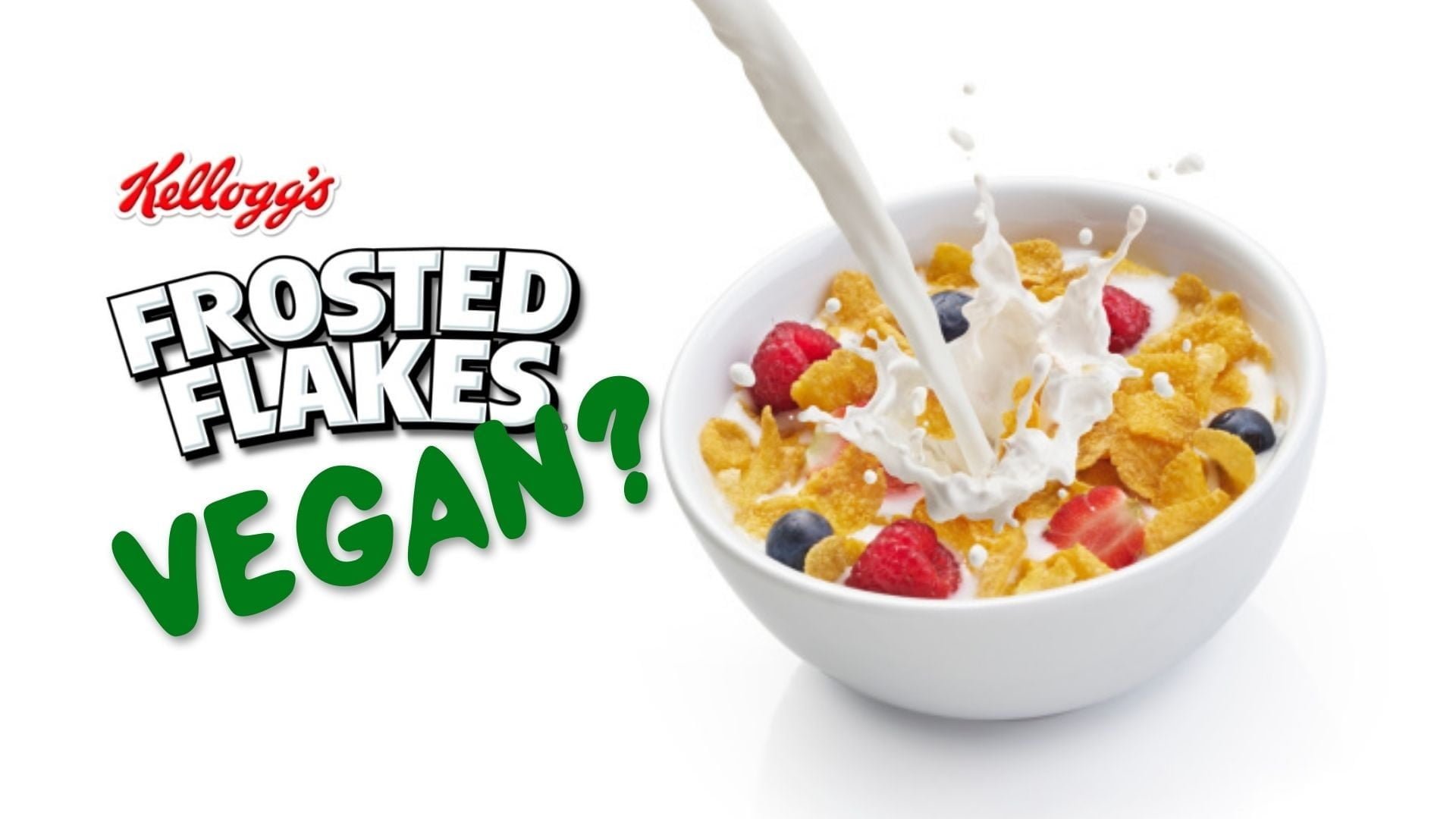 Frosted Flakes, also known as Frosties, is a breakfast cereal made by the Kellogg Company.

It consists of sugar-coated flat flakes.

It’s not good for your health, considering the unhealthy sugar levels.

However, it has been a popular choice among both children and adults.

It was introduced to the market in 1952.

Due to its popularity, generic versions of the cereal were created in different stores worldwide.

Frosties are still the best choice, even though there are cheaper generics.

The Frosted Flakes was America’s second-bestselling cereal in 2017, with gross sales of $27 million.

Many vegans are ask that is Frosted Flakes vegan.

However, some options are more nutritious and healthier.

Continue reading if you want to find out why this crowd favorite is not vegan.

What Is Frosted Flakes?

Frosted Flakes is a sugar-coated corn flake with the perfect thickness and crispness.

Want to learn more about the nutritional benefits of your morning breakfast cereal?

One cup has a nutritional value of:

Frosted Flakes can be a nutritious breakfast that will kickstart your day.

However, it won’t keep you full for long.

Is Frosted Flakes Vegan? What Are The Ingredients?

Let’s look at the ingredients to find out if your favorite breakfast cereal is vegan.

Frosted Flakes contain no blatant animal ingredient other than sugar and vitamin D3.

We will now discuss these two suspect ingredients.

Why Is Vitamin D3 Not Vegan?

Vitamin D3 may not be vegan.

Vitamin D can be found in many fortified foods.

Vitamin D is a vital element that helps maintain your bones, teeth, and muscles health.

It can be obtained from either animal-based lanolin or plant-based Lichen.

Lanolin, a wool wax made from the sebaceous glands in wool-bearing animals, is created by sebum.

It protects their wool from the elements and keeps it soft and moisturized.

You can wash the raw wool with soap or hot water to remove the lanolin.

The process is then followed by deodorizing, bleaching, and drying.

Vitamin D3 made from Lichen is vegan-friendly.

Vitamin D3 is generally non-vegan, as many industries use animal-derived Vitamin D3.

Frosty Flakes does not specify whether it is made from lanolin, Lichen, or both.

Frosty Flakes has only a few micrograms of Vitamin D3 even though lanolin is an animal-driven ingredient.

Some vegans don’t like to give up their favorite breakfast cereal.

It all depends on your opinion.

Why Is Sugar Not Vegan?

Sugar is not vegan.

Sugar can be vegan or not, depending on whether it is made from beet sugar or cane.

Some industries use bone to charcoal in the cane sugar refining process.

Bone char, which is mostly made from the bones of cattle and other animals, is a granular substance that can be produced by burning them.

Bone char is used in many sugar industries as a colorant.

This is why many vegans find this sugar refinement process unacceptable.

We don’t get beet sugar from bone char.

The beet sugar is extracted using a diffuser and mixed with additives to crystallize.

Frosted flakes are difficult to identify the sugar used.

Refined sugar does not contain any bone char particles, but it does have bone char.

I recommend contacting the company if you don’t agree with using bone char in the sugar refinement.

There are five types of Frosted Flakes:

Honey is extracted from beehives.

It has a direct effect on bees.

Gelatine is a protein made by boiling skin, tendons, and ligaments.

Gelatine can’t be made vegan.

The malt extract is made from barley and is gluten-free.

Frosted Flakes are free from Dairy and lactose.

The white color and the malt flavor are not made from milk.

Are Frosted Flakes Made With Gelatin?

Most Frosted Flakes do not contain gelatin.

Frosted Flakes have Pork in Them.

Most Frosted Flakes do not contain pork.

Some marshmallow flavors contain gelatin, which can be pork-based.

Are Frosted Flakes A Good Source Of Eggs?

Frosted Flakes are free of eggs.

There are no brands or flavors that contain egg ingredients in Frosted Flakes.

They are close, but the Vitamin D alone renders them non-vegan-friendly.

Everyone has their own definition of veganism.

Some vegans think it is unreasonable to forgo sugar or vitamin D in this instance.

There is no one definition of veganism.

There are obvious things.

But there are also many gray areas that you will need to determine to feel confident about your decisions.

Get started with these breakfast cereals and feel good about it.

This vegan breakfast cereal is made from nuts, seeds, cacao beans, and other ingredients.

This delicious combination of coconut and cacao beans gives it a distinctive flavor.

All ingredients are organic.

It is free of sugar and certified GMO- and soy-free.

With its high carbohydrate and fat content and low fructose syrup contents, this breakfast cereal is a delicious and healthy choice.

It is low in sugar, which is atypical for sweet cereals.

The taste will amaze you.

The cereal’s subtle cinnamon flavor is due to organic cane sugar.

Kashi breakfast cereal is a nutritious choice for those who love healthy diet foods.

It has low fat and fewer calories.

There are moderate amounts of protein and carbohydrates.

If your health is important to you, this is another boon.

This breakfast cereal is gluten-free, dairy-free, and grain-free.

The carbohydrate count is very low, making it a healthy and delicious option for a healthy morning meal.

This cereal is also free from preservatives.

This cereal has been sufficiently dehydrated to give it a unique crunchiness.

This delicious breakfast cereal is made with grains, quinoa, and oats.

It is low in calories and high in fruit-based essential nutrients.

This breakfast cereal has zero trans-fat.

Peanut butter and corn are the main ingredients.

This cereal has 6g of sugar per serving and no artificial flavor.

This delicious breakfast cereal has a great combination of vanilla, almond, quinoa, and close to zero gluten.

The ingredients are freshly baked, and there are no artificial colors.

A significant amount of the purchase is donated to children in need.

When choosing the best vegan breakfast cereal, be sure to consider the whole grain content, fiber, protein, sugar, fat, and flavors.

You can start your day with the perfect mix of nutrition, taste, health, and veganism.