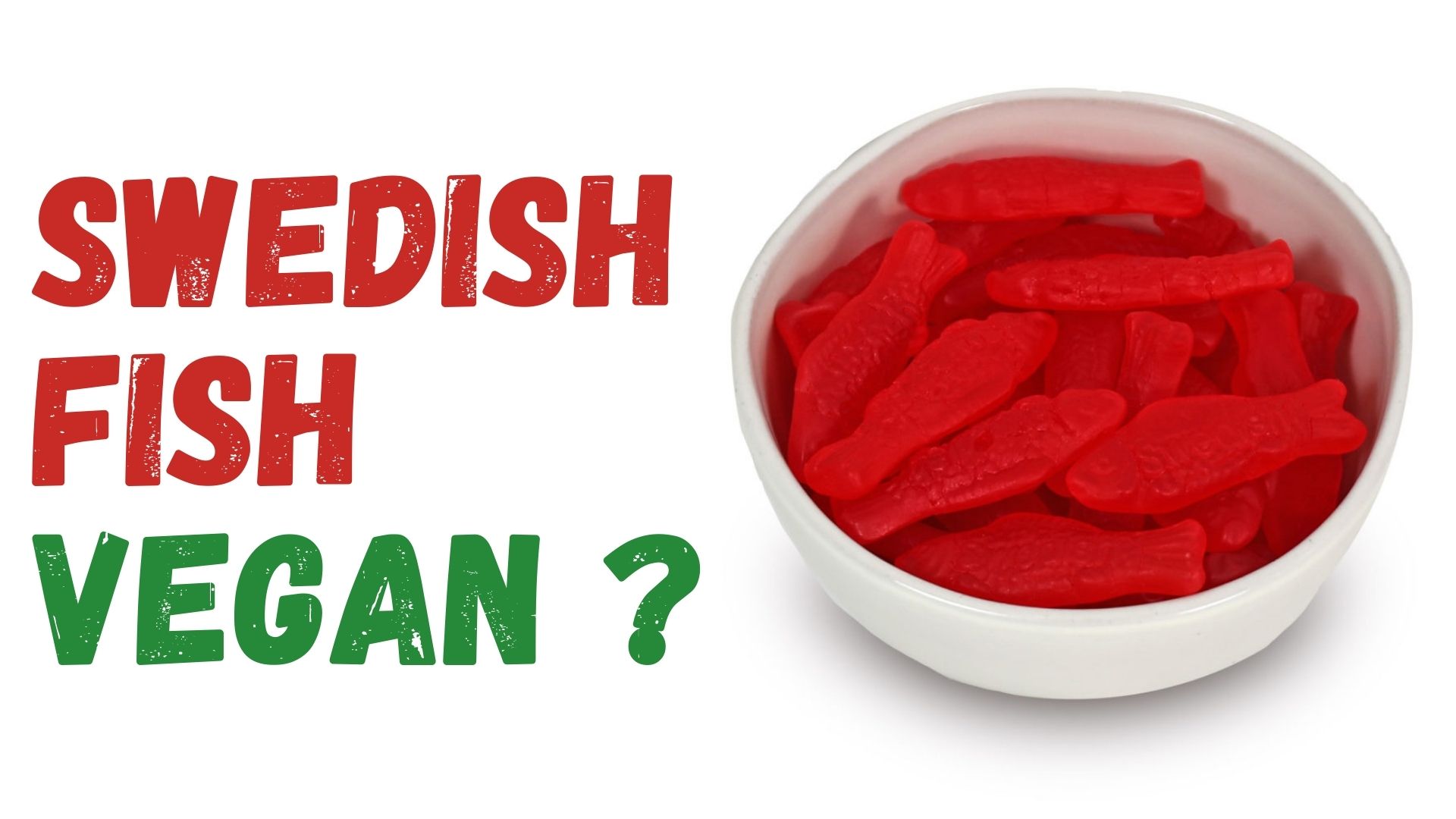 We’ll tell you all about the components in Swedish Fish so you can solve the question once and for all: Is Swedish Fish vegan?

Swedish Fish’s vegan status is decided in part by your personal definition of veganism and how strict you are as a vegan.

Some of the components in this gummy delicacy, such as sugar and palm oil, may appear vegan on the surface, but upon closer inspection, the opposite may be true.

What Exactly Is Swedish Fish?

Swedish Fish are fish-shaped sweets with a chewy texture with the word Swedish written across the body.

They were first available in a single hue (red), but have subsequently been expanded to include additional vibrant colors such as yellow, orange, and green.

The original taste of red Swedish Fish is lingonberry, a berry found only in Europe (although some people were under the impression that this was a cherry-flavored snack).

Other popular culinary flavors, such as orange and lemon-lime, have also been included.

There had been a purple grape-flavored fish, but it had been discontinued by 2006.

This chewy candy was created in Sweden in the late 1950s by Swedish candy producer Malaco to appeal to the US market.

Before we begin our vegan analysis, we’d want to highlight the contentious substances that are presumed to be vegan in our research.

Even though we believe these substances to be vegan, we will flag them if they appear in any uploaded ingredient lists.

Among these contentious elements are:

Sugar is one of the first few components in practically all confectionery creations.

Sugar is a contentious topic among vegans since refined cane sugar is treated with bone char to acquire its pure white hue.

The sugar itself contains no bone char particles, however owing to the manufacturing procedures utilized, it is not vegan.

Because the kind of sugar is not usually specified, it is considered to be vegan in this study.

If you want to avoid non-vegan sugars, avoid all of the products in this analysis.

A detailed explanation of whether sugar is vegan may be found in our post titled “Is Your Sugar Vegan?” “Let’s investigate!”

Palm oil is a contentious vegan component not because it is produced from animals, but because palm oil farming has terrible environmental consequences and affects many animals.

More information regarding palm oil may be found in our article “Is Palm Oil Vegan?”

If known, natural tastes of animal origin will be emphasised.

Some food colors are frowned upon by the vegan community.

This is due to the fact that food colors are frequently tested on animals.

In this article, we presume that all food colors are vegan unless the color itself is derived from an animal or an insect (e.g. Carmine).

The following are the ingredients found on a box of Swedish Fish:

None of these components stick out as non-vegan to most vegans.

Carnauba wax is a waxy material obtained from the leaves of a Brazilian palm plant. It’s vegan, and it’s a frequent confectionery component.

Many vegans, however, have concerns about some of these substances, such as sugar and food colors (the Red 40).

So, is swedish fish vegan ?

Looking at the ingredients list, it’s clear that peg bag Swedish Fish isn’t vegan due to the usage of beeswax.

Because beeswax is sourced from animals, it is instantly ruled out as a vegan-friendly product.

The standard Swedish Fish, on the other hand, is made entirely of plant-based ingredients and is therefore deemed vegan.

Other flavored and colored Swedish Fish sweets are likewise vegan and include the same ingredients as ordinary Swedish Fish candy.

As a result, always check the package to ensure that the candy you’re buying is vegan.

Simply look at the ingredients on the back of the packet.

Are Swedish Fish Safe to Eat?

After learning that Swedish Fish are “a fat-free snack,” one would consider these sweets to be healthful.

However, this is not the case. Swedish fish provide no essential nutrients that your body needs during the day.

There are no vitamins, minerals, or iron present.

Swedish Fish includes a greater concentration of sugar and artificial colors, which, if ingested on a regular basis, may lead to heart disease, diabetes, or other chronic illnesses.

Furthermore, Red 40 is well-known for contributing to hyperactivity in youngsters.

As a result, you should only reward yourself once in a while.

However the business that manufactures this renowned candy, does not have specialized lines for each of its products.

As a result, the possibility of contamination remains.

Nonetheless, they ensures that the lines are thoroughly sanitized before moving on to the next product, and that if there is a risk of contamination, all facts will be included in the box.

Last Words On Whether Swedish Fish Is Vegan or Not

It is entirely up to you whether you want to enjoy this sweet as a vegan or not.

If you’re new to the lifestyle, I’d recommend avoiding any branded animal products and encourage others to do the same, rather than obsessing on little nuances like those in Swedish fish.

That would make the greatest effect for the animals and the environment.